A professional longarm machine quilter for hire and some of the work I've done.

Is God telling me something?

I’ve got the next quilt done.  It was picked up a little while ago and they loved it.  It’s the memory quilt I had on my design wall for a long time.  It was due to be given on Mother’s Day so I worked overtime to finish.  It’s made from the clothing of a young man killed by a drunk driver.  This is what happened.  He was on his way to work, sitting at a red light.  A drunk driver plowed into him.  He was taken to the hospital where his mother is a nurse.  She got to hold him and say goodbye.

The center panel is the shirt his mother was wearing the day he died.   The cream heart is a piece of his baby blanket from when he was born.

He worked at Kroger and this was his favorite hat.  He loved his job.  The two burgundy hearts are from the clothing he was wearing that day.

This is one of his work shirts.  The heart if from the clothing he was wearing. 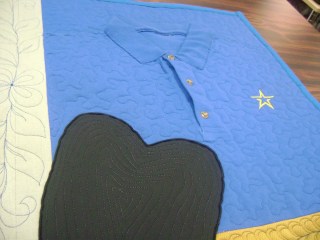 To make it all coordinate together I used a blue thread which matched the backing.  I dressed it up a little for the mother by using feathers and leaves designs and meandering on the shirts.

The shirt collars were left in tact for 3 of the blocks.  I’m proud to have been able to create a memory for his mother.

Now for the other part of this blog post……  Is God trying to tell me something?

Those of you that have known me for a long time may remember just how very much I want to be able to create portrait quilts.  Not just of people but of animals too.  I’ve bought books…. 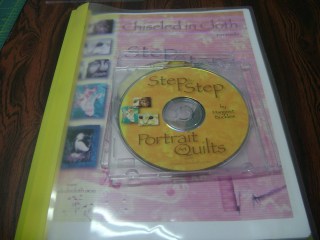 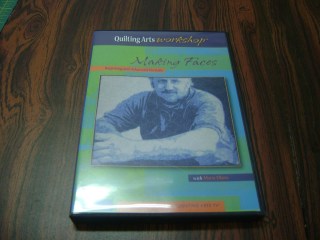 I’ve bought photoshop elements hoping to use it for portraits and for organizing photos to be included in my cardboard furniture instruction book.

Then I bought the book to go with the software.  It only made me more confused.

It’s been one set back after another for probably the last 3 years.  It could be even longer than that.  I can’t remember exactly.  Actually, I’ve wanted to draw portraits my whole life…. I just never got the instructions to help me do them.  Here’s a picture I did in 1977…. the last time I picked up a pencil and sketch pad specifically to draw a person. 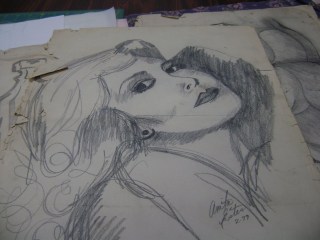 Here’s another one I did that same month.  I had the idea but not any training. 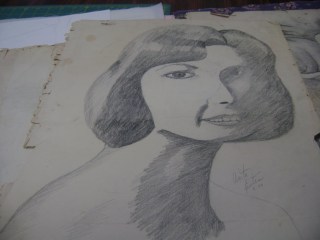 I tried drawing other things too.  These were my husband’s work boots and socks. 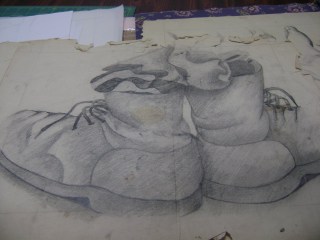 Here’s an attempt to do dog portraits in fabric from years ago.  I got the pattern from a book at the library.  Kind of odd but cute too.

This week I’ve been literally “just a few minutes too late” to get into both a class in Kentucky AND an online class.  The first one was a class in Lexington.  I called to ask about taking a class on the very day it was held.  Not enough time for me to rent a car and get there.  No more are scheduled until “maybe” fall.  The online class?  While I was down loading a new version of Flash player, the class filled up.  Yup, it filled up that fast.  The people from an in person class wanted more instructions so they all signed up at once.  No more are scheduled until September.

I’ve watched my DVDs and read my books again and again.  I still can’t create a portrait quilt on my own.   After crying in frustration for awhile this afternoon, I decided that maybe it’s not meant to be.  Maybe God is telling me to take another path.    Why?  Because for each step I take forward to creating portraits I wind up falling two steps backward.  It’s time to stop putting hopes, dreams, and lots of money into what will never happen.  After a lifetime of hoping and dreaming, it’s time to let it go.

Whatever path God wants me to take…. it will become apparent because it will be the easiest to accomplish.  For now it looks like writing a blog and instruction book about cardboard furniture is going to be first.  The easiest and least expensive.  In the meantime, I still have 2 more tops to get quilted by Tuesday.  This post is already too long.

5 comments on “Is God telling me something?”